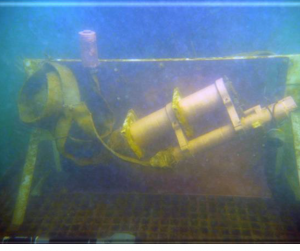 It took nearly a year to validate sensors used to monitor pH in Tampa Bay and the Gulf of Mexico. Photo courtesy USGS

For more than 30 years, restoring seagrasses in Tampa Bay has been a primary focus for bay managers. Seagrasses provide critically important habitat for countless creatures, from the manatees that graze upon them to the snook and redfish that shelter in them until they are large enough to avoid predators. They also serve as a “canary” — a sensitive indicator to environmental disturbance — because they only grow in water that is clean enough for sunlight to penetrate to the bay bottom.

And now researchers are documenting another reason to protect seagrasses: They may provide a refuge from ocean acidification that is threatening shellfish, coral reefs and the plankton that are a critical part of the global food web.

Ocean acidification – or OA — occurs when seawater absorbs large quantities of carbon dioxide. Through a complex chemical reaction, the CO2 lowers the water’s pH (increasing its acidity), sometimes to the point where it can dissolve the shells of shellfish and skeletons of corals. At the same time, it also lowers concentrations of biologically important carbon compounds that are used to build shells and coral skeletons.

While scallop fisheries in the northern Atlantic, oysters in the Chesapeake Bay, and crabs and salmon in the Pacific northwest are threatened by increased acidity, levels in Tampa Bay are actually dropping. “The pH increased about the time seagrasses began to rebound as nitrogen loads were cut and water quality improved,” said Ed Sherwood, then a scientist at the Tampa Bay Estuary Program who first observed the correlation from long-term monitoring data. “We’re still not sure if it’s a direct link, but the increase in pH definitely coincided with the seagrass recovery,” adds Sherwood, who is now executive director of the TBEP. 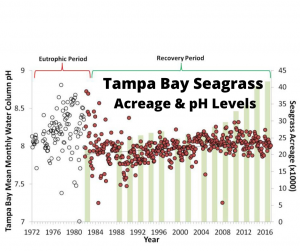 Like all plants, seagrasses use CO2 to grow. That pulls the CO2 out of the water and slows the chemical reaction that causes acidification.

“This is really important in Tampa Bay because pH is dropping and acidity rising in many other coastal systems – at up to five times the rate of global ocean acidification in some locations,” said Kimberly Yates, senior research oceanographer at the U.S. Geological Survey’s St. Petersburg Center for Coastal and Marine Science. “Our primary question for monitoring in Tampa Bay is to determine if it is a regionally significant refuge from coastal acidification for our bay species as an added benefit from seagrass restoration.”

The most recent monitoring program grew out of a 2015 initiative looking at the potential role of seagrasses in keeping acidification from increasing in Tampa Bay. Two seagrass beds, one in Old Tampa Bay and another in Middle Tampa Bay, were monitored for pH looking for correlations between seagrasses and changes in acidity on a daily basis. “Seagrass beds can locally elevate pH during the day but they can also decrease it during the night,” she said.

That happens because seagrasses use sunlight to take up CO2 as part of the photosynthesis process. During the day, when light levels are high, seagrasses can absorb greater quantities of CO2 than what is produced by respiring animals (those that breathe dissolved oxygen and exhale CO2) living in the seagrass beds, causing an increase in pH.

The flip side of that equation is that at night when there is only respiration occurring, CO2 levels increase and pH decreases. “The question is what is the balance – are there more benefits from seagrass beds increasing pH during the day, and are they localized only to seagrass beds or is there a bay-wide benefit?” Yates said. 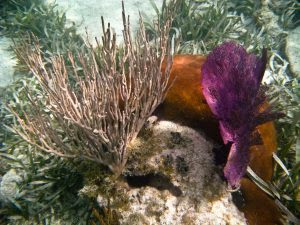 The USGS also is monitoring the impact of ocean acidification on coral reefs in the Dry Tortugas. Photo courtesy USGS

In 2017, TBEP was invited to join 10 other National Estuary Programs across the U.S. in an Environmental Protection Agency program focused on developing an acidification monitoring network. The estuary programs are working to determine causes of acidification, potential impacts, and how effects might be mitigated.

Along with the environmental issues, ocean acidification can decrease production of economically important shellfisheries, an impact which has already been documented in other U.S. regions. Shellfish beds like oyster reefs are also important for protecting coasts from erosion by armoring the shoreline which is particularly important during storm events.

The Tampa Bay effort is led by the USGS and TBEP, supported by more than 20 researchers from seven agencies and institutions, including the University of South Florida’s Physical Oceanographic Real-Time System (PORTS) and Coastal Ocean Monitoring and Prediction System (COMPS), which collect real-time oceanographic and meteorological data.

As part of the national effort and to start finding answers in Tampa Bay, a more sophisticated monitoring system was deployed in 2017 on a USF PORTS station located in a narrow section of Tampa Bay between the Manatee and Little Manatee rivers. “It’s well-mixed, shallow water except for the ship channels,” Yates said. “We can measure the pH in the Gulf of Mexico water as the tide comes into the bay and then compare it to the pH in estuarine waters as the tide goes out.” 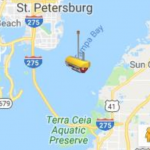 The solar-powered system uses cutting-edge technology that took nearly a year to adapt for use in Tampa Bay and validate its performance. It measures pH, salinity, temperature, dissolved oxygen levels and the light that seagrass uses to grow to correlate relationships among those variables.

Early results from the Tampa Bay monitoring system show that, during the dry season, pH and dissolved oxygen are higher in the estuarine waters and CO2 is lower. Seagrasses likely contribute to this effect, especially when they are growing quickly and taking up larger quantities of CO2 as they grow.

“The fact that our sensors are located in the middle of the bay where seagrasses are not growing suggests a bay-wide benefit that spreads beyond the limits of seagrass beds,” Yates said. 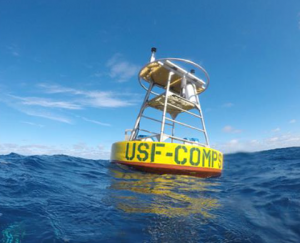 A second monitor has been installed about 60 miles west of Tampa Bay. Photo courtesy USGS

A second station was deployed about 60 miles out in the Gulf of Mexico on a USF COMPS station in 2018. At this station, the water chemistry is strongly controlled by temperature and salinity throughout the year. Comparing measurements from this station with the Tampa Bay station will help measure the biological impact of seagrasses and other processes in the bay are having on water quality.

“As expected, we’re seeing more fluctuation in the bay compared with very stable results from the offshore system,” Yates said. “The stability of the offshore data will help quantify effects of the seagrass restoration in Tampa Bay.”

While results are still preliminary, Tampa Bay is part of ground-breaking research with global impacts. “Ocean acidification is a world-wide problem that has to be tackled at the global level, but we can learn what local processes contribute to acidification in our Tampa Bay coastal ecosystems and how we might mitigate it so we can better protect our fisheries and shorelines,” Yates said.