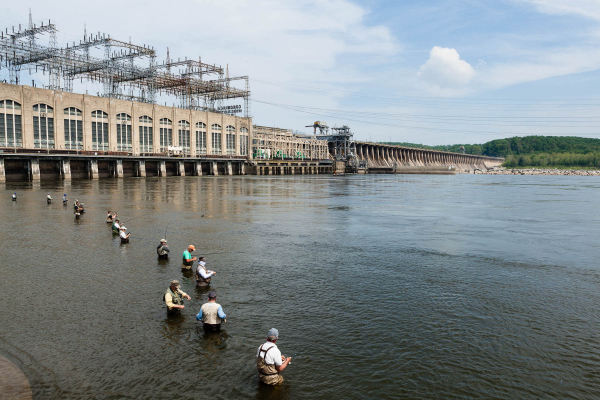 Anglers line up downstream of the Conowingo Dam near Conowingo, Md., on May 8, 2016. (Photo by Will Parson/Chesapeake Bay Program)

While the Conowingo Dam lies in Maryland and is owned by the Exelon Corporation, it sits on the Susquehanna River which flows downstream from New York and Pennsylvania.

Since its construction, the reservoir behind the dam has captured sediment—and the nutrients that are often attached—flowing down the Susquehanna River, reducing the amount of nutrient and sediment pollution entering the Chesapeake Bay.

While the reservoir has long served as an effective way to control pollution, a 2015 report by the U.S. Geological Survey estimated that the reservoir had reached 92% capacity. Another report, this one by the Lower Susquehanna River Watershed Assessment team, confirmed that the reservoir located behind the dam had essentially become full and was trapping smaller and smaller amounts of sediment.

If the reservoir is unable to trap sediment, it will flow downstream into the Chesapeake Bay, often carrying nutrient pollution and chemical contaminants, which can reduce water clarity and dissolved oxygen. Extreme weather creates an even stronger impact. During the record-breaking rainfall in 2018, many of the dam’s gates were opened to relieve pressure, sending large amounts of debris and pollution downstream at a rapid pace.

It took a partnership to address such a complex issue. The Chesapeake Bay Program Principals’ Staff Committee decided in early 2018 that a steering committee made up of representatives from each watershed jurisdiction (Delaware, Maryland, New York, Pennsylvania, Virginia, West Virginia and the District of Columbia) and the Chesapeake Bay Commission, would oversee the development of a watershed implementation plan (WIP) and financing strategy that would be specifically aimed at addressing the additional pollutant loads flowing into the Chesapeake Bay as a result of the reservoir no longer trapping sediment. The Environmental Protection Agency (EPA) would provide oversight in the development and implementation of the WIP, evaluate and track progress, and provide funding support through grants.

Fast forward a year and a half later, and the work is underway. In coordination with the watershed jurisdictions, the EPA recently announced that it awarded nearly $600,000 for three projects to further the Conowingo WIP. About $200,000 of that amount comes from EPA grants provided to watershed jurisdictions for their Chesapeake Bay restoration work.

Bryan Seipp, project manager from the Center for Watershed Protection, noted that “addressing the increasing nutrient and sediment loads to the Chesapeake Bay as a result of the Conowingo Dam… is a complex and challenging task.”

A WIP includes detailed, specific steps that will be taken to reduce pollution, and the Conowingo WIP will be separate from the ones that each watershed jurisdiction submitted in August 2019. Under the Chesapeake Bay Total Maximum Daily Load, each watershed jurisdiction has a unique pollutant reduction target to meet by 2025, and they report on the progress they are making toward meeting their milestones every two years. The Conowingo WIP will follow the same process.

“We all benefit from innovative partnerships to protect and restore the Chesapeake Bay” said Hogan.

Learn more about the Conowingo Dam.