RALEIGH – A recent report from the North Carolina Wildlife Resources Commission recommends putting a state agency in charge of removing derelict and abandoned vessels in navigable North Carolina waters, with dedicated funding to address the problem. 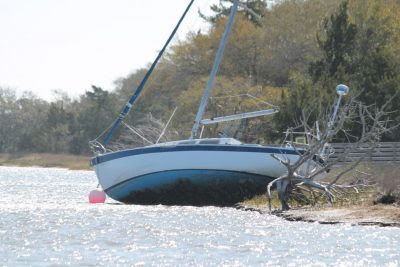 In North Carolina, the legislature has granted limited authority to local governments and state agencies to determine how and when a vessel can be removed. But local officials continue to struggle with abandoned and derelict vessels in waterways and sometimes washed up on public or private lands, threatening navigation and the environment.

The North Carolina General Assembly in 2018 directed the WRC to provide the report by April 30 because of the growing concerns over abandoned vessels and to consult the Division of Coastal Management, North Carolina Coastal Federation, the National Oceanic and Atmospheric Administration Marine Debris program, marine salvage industry experts, commercial and recreational boat owners and other stakeholders.

The report notes that the resource used as a starting point was current up to 2015 and the researchers reached out to each coastal and Great Lakes state included in the report to update, clarify and collect more data.

In addition to naming a lead state agency to manage the problem, the report also recommends establishing a WRC-coordinated task force for abandoned and derelict vessels, or ADVs, as well as enacting a law defining and addressing ADVs statewide with disposal options and vessel owner notification protocols and rights. The report also calls for establishing education, outreach and prevention programs, including a vessel turn-in program fashioned after those used by other states.

The WRC manages more than 200 boating access areas on public waters across the state and is the chief enforcer of boating safety laws in North Carolina. In addition, the WRC works with local governments to determine no-wake zones.

“The WRC also manages the placement of waterway markers in conformance with the uniform rules to aids to navigation for boating access areas and approved no-wake zones across the state,” Kennemur said.

The University of North Carolina Institute for the Environment and the North Carolina Policy Collaboratory were contracted to research how other states with navigable waterways manage abandoned and derelict vessels for the report.

Researcher Susan Cohen with the Institute for the Environment said that the WRC developed the report’s overall approach to address and meet the North Carolina legislative direction.

She explained that the Institute of the Environment provided a summary of abandoned and derelict vessel programs in coastal and Great Lakes states produced by using sources of existing, current information, including the NOAA Marine Debris Program, with follow-up communications with each of the states to confirm that information. “Other groups, like NOAA for example, have done a great job capturing state-level information and we just built off what these other efforts had accomplished,” she said.

Read the rest of the story at Coastal Review Online here: