The Maryland Department of Natural Resources is teaming up with the U.S. Fish and Wildlife Service to host the first “Freedom and Fishing Snakehead Derby” on June 8 at Harriet Tubman Underground Railroad State Park in Dorchester County.

Anglers of all ages are invited to participate in this free, all-day derby, which features snakehead fishing demonstrations, door prizes, cooking techniques and a limited quantity of free snakehead fillets. Prizes will be awarded to anglers who reel in the largest northern snakehead of the day.

The northern snakehead, an invasive species that is native to Asia, has successfully adapted to the Chesapeake Bay watershed. Its ability to thrive even in poor habitat, its diet of numerous prey species and its frequent spawning has thrust the snakehead into notoriety after its illegal introduction in the early 2000s. 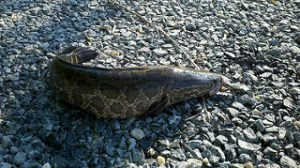 Sought after by many anglers, the northern snakehead puts up a good fight, and is also highly regarded as a delicacy.

“There are many misconceptions about the northern snakehead, and events like Freedom and Fishing help inform the public, as well as create opportunities for anglers to harvest this species,” Fishing and Boating Services Program Manager Dr. Joseph Love said. “The snakehead fishery is relatively new and we want to raise its awareness, not only as a fun fish to catch but also to eat.”

Participation for Freedom and Fishing is free, but registration is required.

The department encourages everyone who catches a northern snakehead to harvest it and not return it to the water. If the snakehead has a tag, the angler should measure the length, make a note of the exact location of capture and call the toll free number printed on the tag. For more information on snakeheads, the department has introduced several informational videos, supplemental fact sheets and an updated webpage.