“The Neko ShroomZ employs the same head design as Z-Man’s Finesse ShroomZ jighead, a shape that adds a sweet rocking, pivoting action to whatever bait you put on the hook,” said Daniels. “This cool little weight has a stainless centering wire and a double-barbed keeper. The wire easily penetrates the material and makes it way easier to rig perfectly straight. The keeper grabs hold and stays locked in place.”

Z-Man confidant Drew Reese, co-creator of the Neko ShroomZ, said the team worked through “at least nine different keeper configurations before implementing its final, bulletproof design. It grabs and holds ElaZtech just as well as other soft plastics; much easier to rig than traditional nail- and screw-style weights. If you’re dealing with extra aggressive bass that like to jump and thrash on the hook, a tiny drop of superglue on the shaft creates a permanent connection.”

Timed to tap spring bass bites across America, Daniels offers advice for putting the Neko ShroomZ to work. “I’ve always got a medium action spinning rod on the casting deck, Neko-rigged with a Z-Man Hula StickZ—that’s my favorite finesse bait for sure. The Finesse WormZ is another fish catcher. And I’m super hyped about a brand new ElaZtech bait I’ve been throwing lately. Can’t talk about that yet,” he says with a playful grin. “But stay tuned.”

Daniels casts his Neko rigs with 15-pound Seaguar Smackdown braid and a 6- to 10-pound Seaguar Tatsu fluorocarbon leader. “You need line that’s fine and supple enough to maximize the action of a Neko rigged bait. From there, I run a #2 Owner Sniper Finesse hook, impaling the worm about 1/8-inch up from the egg sack, toward the narrower end.”

While traditional Neko- and wacky-rigging requires the angler to slide a rubber O-ring over the bait, under which the hook is planted, ElaZtech is actually tough and tear-resistant enough to eliminate this extra accessory. “You can definitely direct-hook ElaZtech baits for Neko rig fishing,” Daniels observes. “Sometimes, though, I’ll still use an O-ring, which helps prevent the hook from stabbing back into the bait on a hookset. The O-ring also helps the bait slide up the line, so you’re directly connected to the bass.

“In tournaments, we’re constantly fishing for pressured bass,” he adds. “A Neko-rigged Finesse WormZ or Hula StickZ offer such a non-threatening presentation that fish don’t get conditioned to them. Deadly throwback baits, too. And I love the rig around docks because it skips really well. The Neko ShroomZ is also a great tool for spawning bass. Keeps one end of the bait pinned in place on the bed while the other end floats above, tail wagging with the slightest movement of the rod tip.

“Actually, it’s easy to overfish this rig because it’s so naturally subtle and lively. I always tell people, ‘less is more’ with ElaZtech. Throw it out, let it go to the bottom and lightly shake the braid. A lot of times, a bass will follow to the bottom, and strike as soon as you make the bait dance a little.”

Daniels adds that with weight options from 1/6- to 1/20-ounce, he’s fished Neko ShroomZ-rigged baits from 1 to over 30 feet of water. “I like to fish it vertically for deep spotted bass, watching the fish’s reaction on electronics. The bait’s that versatile.”

Beyond Nekos and wackys, one intriguing alternative has affectionately become known as the ‘Tiny Child Rig’. “It’s sort of a Texas rig in reverse,” says Kyle Peterson of Wired2Fish.com, who unveiled the rig last summer. “I needed something hydrodynamic and subtle I could drop straight into logjams, brushpiles and heavy vegetation without snagging. Take a Z-Man Finesse TRD and Texas rig it with a Neko-style hook and Neko ShroomZ weight in the thicker end. Looks like a miniature pogo stick hopping along bottom, but bass and walleyes eat the heck out of it. The rig’s so fun and easy to fish that, well, let’s just say it lives up to its name.” 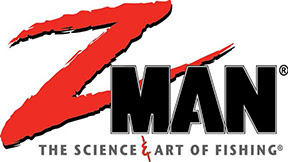 About Z-Man Fishing Products: A dynamic Charleston, South Carolina based company, Z-Man Fishing Products has melded leading edge fishing tackle with technology for nearly three decades. Z-Man has long been among the industry’s largest suppliers of silicone skirt material used in jigs, spinnerbaits and other lures. Creator of the Original ChatterBait®, Z-Man is also the renowned innovators of 10X Tough ElaZtech softbaits, fast becoming the most coveted baits in fresh- and saltwater. Z-Man is one of the fastest-growing lure brands worldwide.

?About ElaZtech®: Z-Man’s proprietary ElaZtech material is remarkably soft, pliable, and 10X tougher than traditional soft plastics. ElaZtech resists nicks, cuts, and tears better than other softbaits and boasts one of the highest fish-per-bait ratings in the industry, resulting in anglers not having to waste time searching for a new bait when the fish are biting. This unique material is naturally buoyant, creating a more visible, lifelike, and attractive target to gamefish. Unlike most other soft plastic baits, ElaZtech contains no PVC, plastisol or phthalates, and is non-toxic.