After hooking a fish, reeling it in from the sea floor and posing for a photo, there’s a fairly good chance a recreational fisher might release their catch back into the ocean. The chance of that fish’s survival is less clear.

Rising numbers of released fish, combined with an uncertain likelihood of their survival, has made it more challenging to estimate how many fish die after release, which is a crucial factor considered when creating fishing regulations.

Researchers at North Carolina State University’s Center for Marine Science and Technology, or CMAST, have been studying the fate of released fish, called discards, to more accurately estimate death rates from fishing and to improve survival of discards.

Over the past few years, they’ve determined discard survival likelihood for several deep fish species. They’ve also confirmed that helping a fish get back to deep water, through strategies like venting and recompression, significantly increases a fish’s chance of survival.

Deepwater fish live under pressure. The pressure at 90 feet underwater is almost four times greater than at sea level. When fish from about that depth or deeper are brought to the surface, the sudden drop in pressure can lead to injuries called barotrauma.

Barotrauma looks extremely uncomfortable. The gas inside a fish’s swim bladder, an internal organ that helps them float, expands and can even push other organs out of the fish’s mouth. The fish’s eyes may bulge out of its head. A bloated swim bladder can also act like swim floaties, preventing the fish from returning to deeper water when it’s released. That fish might die at the surface or a predator might pick it off. 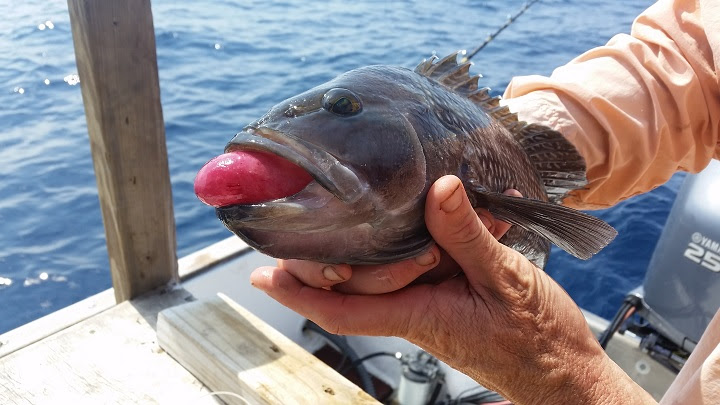 Read the rest of the story in Coastal Review here: