A Conversation with Ned Kehde, Originator of the "Ned Rig" 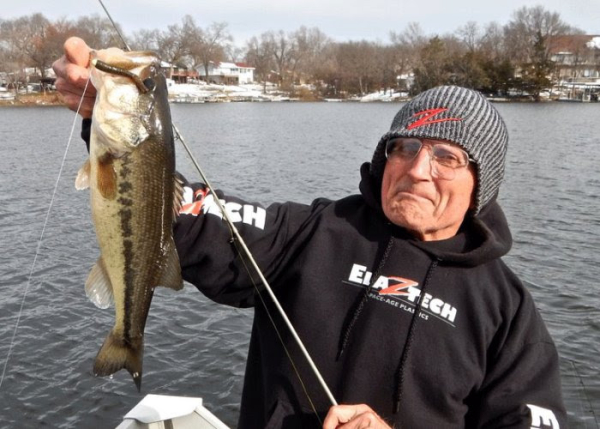 Ladson, SC – Classy, kind-hearted and self-effacing to a fault, Ned Kehde likes to tell you the world has passed him by. That he’s not the angler he used to be. That he uses simple baits because he’s a simple man. The truth is, Kehde has a wise reason for everything he does; knows precisely how to make bass bite; and for goodness sake, knows more about the history of bass fishing—including exact months and years various events occurred— than almost anyone alive.

A retired archivist for the University of Kansas and legendary writer of fishing stories, Kehde recalls that April day in 2006 when the modern Midwest Finesse technique clicked into place. “I was in Japanese angler Shinichi Fukae’s boat at Beaver Lake,” Kehde recalls. “What immediately struck me were Fukae’s methods, which mirrored the finesse tactics my friends and I had adopted back in Kansas. Using a 3/32-ounce jig and shad-style worm, Fukae retrieved the lure a few inches off bottom, reeling and shaking as it went along.”

That same year, Kevin VanDam showed Kehde an early ElaZtech bait. The bait, a Strike King Zero, was the first ultra-durable soft stickbait manufactured by the parent company of what would eventually become Z-Man Fishing. Not long after, the Ned Rig was born. But we’ll let Ned take it from there . . . 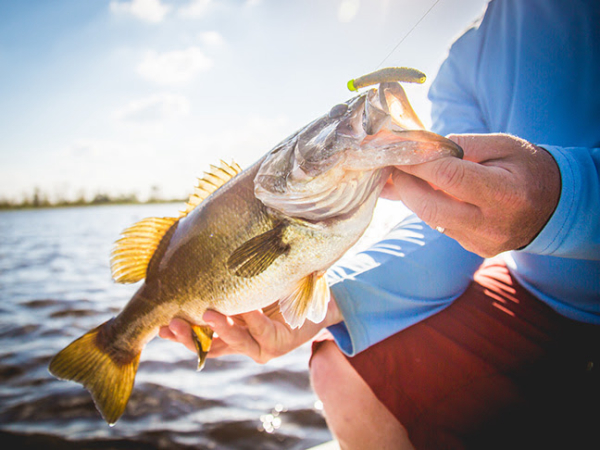 Tell us about the history of what’s known today as Midwest Finesse fishing.

Kehde: A lot of folks think finesse bass fishing started in California, on those deep clear reservoirs, back in the 1970s and 80s. Actually, in the 1950s, a Kansas City angler named Chuck Woods was already fishing a soft lure called the Beetle on a spinning rod. Woods designed the Beetle, Beetle Spin and Puddle Jumper—three classic finesse lures—and also created the first Texas-rigged jigworm.

I first met Woods at a Kansas City tackle shop in 1970. He was a taciturn old cuss, but I believe he probably caught more Kansas largemouth bass than any man in history.

Guido (Little Gete) Hibdon was another legendary Ozarks angler who regularly wielded a spinning rod rigged with a light jighead and soft plastic bait long before Western anglers. The first time Midwest finesse met Western waters was when Drew Reese fished the first ever (1971) Bassmaster Classic at Lake Mead. Reese finished in 7th place, fishing a jigworm and Beetle Spin. Finally, during a 1980s trip to Mille Lacs, Minnesota, Ron Lindner put a Gopher Mushroom jighead in my hands. I was amazed by how you could drag this jig over rocky terrain and rarely get hung up.

Kehde says the TRD MinnowZ is one of the most underrated, durable and productive finesse baits ever created.

Beyond the history, what’s one thing most folks today should know about Midwest finesse tactics?

I’m primarily fishing from 3 to no more than 12 or 15 feet deep, mostly with 1/32- and 1/16-ounce jigheads. One favorite retrieve among Midwest Finesse anglers is something we call swim-glide-shake. We’re retrieving the lure 6 to 12 inches above the bottom, which is difficult to do with a heavier ¼- or 3/16-ounce jig. We like to err on the side of lightness. I guess you could say we try to use our intuition to figure out what the bait is doing — sort of let the soft ElaZtech material naturally shake, shimmy and do its thing without getting in its way too much. It sounds more complex than it really is because when coupled with the right line (Kehde prefers 15-pound braid), you immediately detect any resistance the lure encounters. That includes sensing the difference between the lure contacting filamentous algae, a twig or a lightly biting bass. 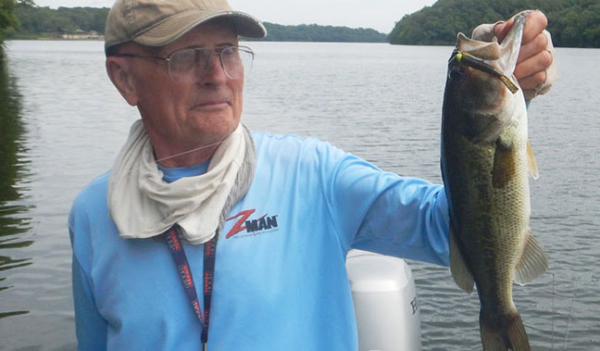 A 1/16-ounce #4 mushroom is the most unbeatable jig in the history of the world. We already talked about how this shape performs so beautifully around cover. But it really allows an ElaZtech bait to do its thing — shake and shimmy — without getting in its way. I know a lot of anglers think a #4 hook is too small, but to me, a bigger hook doesn’t slide through brush or vegetation nearly so well as a #4, which is almost snag-free.

I also feel like I do way less damage to the fish with a smaller hook. But beyond that, a bigger hook just gets in the way of the bait’s gyrations, sort of neutralizes some of the magic of super-soft, buoyant ElaZtech baits.

What’s the deal with your favorite red jighead?

I was already a fan of red jigheads when I fished with Shin Fukae that day on Beaver Lake, back in 2006. He was using red and doing a number on the fish, which really reinforced my beliefs and confidence in the color. Fukae also used red nail polish to paint polka dots on his crankbaits and topwaters.

Years before that, Gopher Tackle owner Conrad Peterson would constantly urge me to fish “red, red, red,” regardless of water clarity. But when red isn’t going, I like blue and chartreuse, too. A blue jig is especially effective during the bluegill spawn. A flash of blue really mimics that super vivid hue present on a bluegill’s pre-dorsal area. Another hot pattern lately has been a Junebug colored Finesse TRD with a chartreuse jighead.

Kehde’s favorite red mushroom jighead, this one rigged with a Finesse TRD and TRD SpinZ for extra flash and vibration.

What’s your record for the most bass caught on a single ElaZtech bait?

I believe the all-time record was 232 fish on a single 4-inch Z-Man Finesse WormZ. Few years ago, while testing a prototype of the TRD HogZ, we caught 55 bass in 69 minutes. When I mailed the bait to Z-Man, it had already produced 112 fish, and was still in really good shape.

Although the Finesse TRD and ZinkerZ receive most of the press, what are a few of your other favorite finesse baits?

One bait that for sure deserves more attention from finesse anglers is the TRD MinnowZ. The MinnowZ moves totally different in the water than the Finesse TRD. It totally lacks salt, making it exceedingly durable, buoyant and lively underwater. My fellow finesse anglers have caught untold numbers of bass on this bait, rigged on a mushroom jighead or a dropshot, including some 8-pound lunkers.

From my experiences, the TRD MinnowZ possesses some of the attributes of a reaper, stick-style bait, and worm, all in one. I prefer to rig it with 1/32-ounce jig so the bait lays flat on its side, aligning the tail horizontally. It offends the eyes of some anglers, but the bait fishes beautifully this way. The ultralight 1/32-ounce jig produces a wonderful glide effect. Jerk the bait once and let it glide. With this combo, 10 to 25 fish an hour is a realistic goal.

The Finesse ShadZ is another serious fish catcher. It’s got an incredibly appealing shad-shaped profile that bass respond to. Because it lacks salt, the extra-buoyant, super-soft bait fishes light and with tremendous, subtle undulations. These manifold virtues enhance the ShadZ’s ability to render an unparalleled no-feel retrieve. 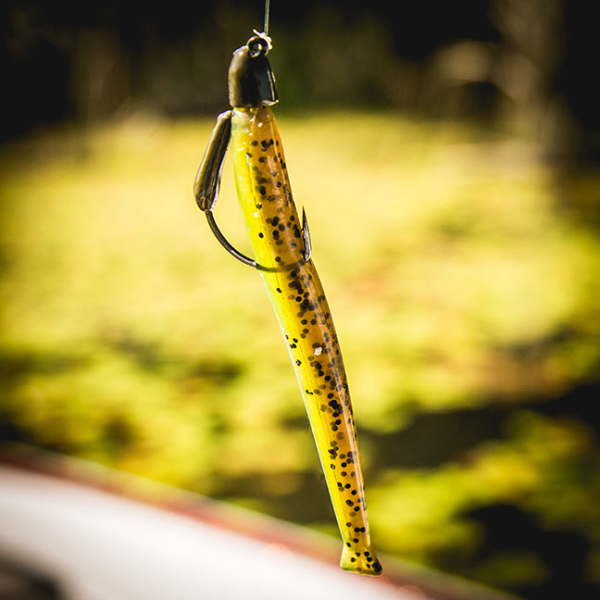 What factors do you think account for the popularity of the Midwest Finesse (Ned Rig) style of fishing?

Well, I look at tournaments after all these years of observing the best anglers and am still amazed by how few fish they catch in competition. Fishing for five big fish is not a good way for us or the everyday angler to propagate the sport.

I think tournaments have exaggerated the price of what it truly costs to go fishing. It’s important for recreational anglers to understand that fishing really can be much simpler, and much less expensive than it’s too often purported to be. Midwest finesse style fishing pares everything down to its bare minimum—just you, a simple jig and lively bait and the bass. Every angler can relate to that. At the end of the day, most of us just want to catch a bunch of fish.

Ned Kehde, Lawrence, Kansas, is a retired university archivist, fishing guide and longtime outdoor writer who has helped fine-tune a phenomenal fish-catching system known today as the Ned Rig. Connecting hundreds of anglers across the continent, Kehde’s online Finesse News Network features some of the most detailed fishing reports ever written. At the heart of the Ned Rig system, always, are a mushroom shaped jighead and an ElaZtech finesse-style bait. In recent years, the popularity of the Ned Rig has proliferated well beyond its Midwestern roots, becoming a staple presentation among recreational and tournament anglers across North America.

About Z-Man Fishing Products: A dynamic Charleston, South Carolina based company, Z-Man Fishing Products has melded leading edge fishing tackle with technology for nearly three decades. Z-Man has long been among the industry’s largest suppliers of silicone skirt material used in jigs, spinnerbaits and other lures. Creator of the Original ChatterBait®, Z-Man is also the renowned innovators of 10X Tough ElaZtech softbaits, fast becoming the most coveted baits in fresh- and saltwater. Z-Man is one of the fastest-growing lure brands worldwide.

?About ElaZtech®: Z-Man’s proprietary ElaZtech material is remarkably soft, pliable, and 10X tougher than traditional soft plastics. ElaZtech resists nicks, cuts, and tears better than other softbaits and boasts one of the highest fish-per-bait ratings in the industry, resulting in anglers not having to waste time searching for a new bait when the fish are biting. This unique material is naturally buoyant, creating a more visible, lifelike, and attractive target to gamefish. Unlike most other soft plastic baits, ElaZtech contains no PVC, plastisol or phthalates, and is non-toxic.