How to catch river-run spring walleyes

Winter’s waning moments signal the start of an annual rite of spring, as schools of spawn-minded walleyes surge upstream in rivers across the continent. Don’t let the cool water temperatures fool you, the spring run can produce some of the year’s best fishing for walleyes and sag-bellied saugers.

“My favorite fisheries are good-sized rivers flowing into larger bodies of water, like the Detroit River on the western end of Lake Erie, or the Rainy River at Lake of the Woods along the Minnesota-Ontario border,” he says. “Walleyes from the main lake congregate around the river mouth in late winter, then swim upstream to spawning areas—thereby boosting the walleye population into the stratosphere.”

To find fish fast, Leer often begins his walleye quest at the river mouth and works up from there, prospecting prime lies like channel edges, eddies and all sorts of likely-looking seams and current breaks.

“Virtually anything that breaks the current or otherwise offers walleyes an opportunity to rest or feed is worth a try,” he says. “Main-channel holes rank high on my hit list. Holes are magnets for fish moving up and down the river, and often ‘recharge’ throughout the day as fresh waves of walleyes roll in.” 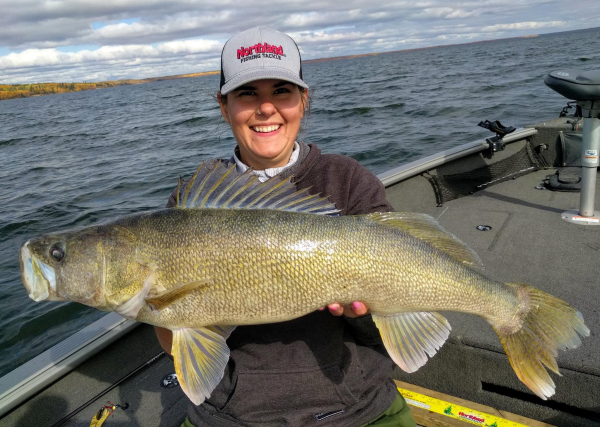 A variety of tactics take spring walleyes, from three-way rigging to trolling crankbaits along the bottom. For Leer’s money, vertical jigging is hard to beat. “You can jig from an anchored position or while slipping down-current, using your trolling motor to keep the line vertical,” he says.

Leer’s go-to leadheads include Northland Fishing Tackle’s Slurp! Jig, UV Whistler Jig and round-head RZ Jig. “These jigs hold live bait and plastics in place, and allow me to get a solid hookset,” he explains. “That being said, the relatively new Swivel-Head Jig is an up-and-coming choice. I like the way the jig’s rotating hook gives live bait and plastics more action than traditional fixed hooks.” 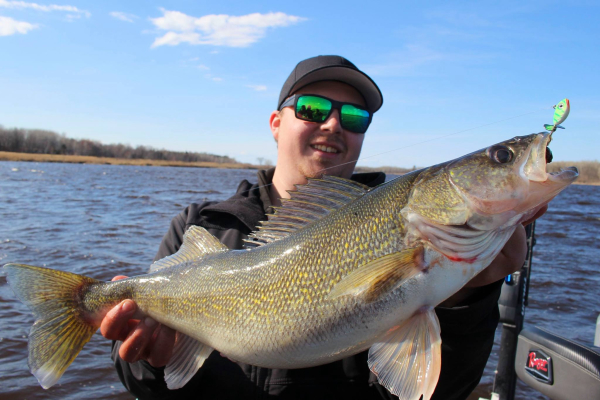 Leer recommends tipping your jigs with a flavorful artificial trailer like Northland Fishing Tackle’s IMPULSE Paddle Minnow, Smelt Minnow or Ringworm. “Three- to 5-inch baits give walleyes a target in the low-visibility conditions common in spring rivers,” says Leer. “For added scent and taste, skull-hook a fathead or shiner minnow on top of the plastic bait.”

For best results, Leer advises keeping your jig strokes on the down low, especially early in the spring run. “Slow and methodical lift-drop moves tight to bottom trump crazy ripping maneuvers,” he says. “Some days, holding the jig still, within an inch or two of bottom, gets the most bites. As the water warms up and walleyes gravitate to shallow water near the bank, pitch your jig toward shore and experiment with different dragging, swimming and pendulum presentations,” he says.