The Spring that Wasn’t 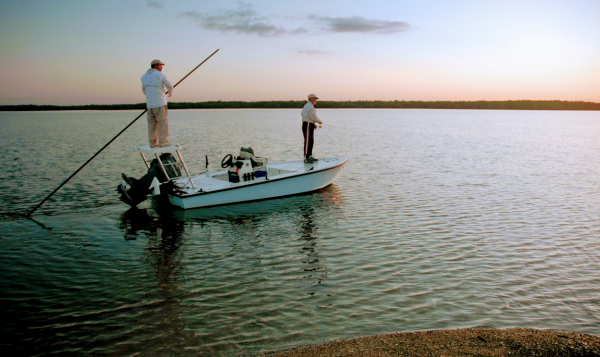 I just spent a couple hours listening to a collection of my Florida fishing guide buddies complain that all their spring charters are cancelling just at the time when the spring bite has gone off both inshore and offshore. It’s a time when many of them make a major portion of the income that carries them through the rest of the year.

Each year, beginning around St. Patrick’s Day and continuing through May, the coastal fish in Florida go bonkers as all the bait begins to move in and the fish gorge themselves, packing on weight prior to late spring and summer spawning times.

Inshore, it’s snook, reds and trout, while off the beach it’s king mackerel, Spanish mackerel and cobia. Tarpon will be along soon, typically when water temperature hits about 75. Fish are practically jumping into the boats. Some guides run two trips a day during this period.

This year, they’re sitting at the docks. And they’re pissed. Many blame over-reaction by the government and the media. Even driving down to the Florida Keys as a non-resident is impossible. Hotels and marinas are shut down. Most of the big fishing piers are closed statewide.

Most of my pals are not math majors. Me either—that’s why I started adult life as a fishing guide instead of an astro-physicist. But it seems to me the part a lot of us are still not getting is that we are, unfortunately, very early in the spread of the COVID-19 pandemic.

While the overall percentage of those who have tested positive in the U.S. is relatively low as this is written, about 20,000 on a population of 320 million, it’s the rate that the infection number is going up that is concerning the smart, dedicated people charged with controlling this outbreak.

In fact, I’m writing this Saturday—it’s safe to say that by Monday, the number is going to be closer to 30,000 than it is to 20,000. It’s doubling about every 6 days per the CDC. Multiply that out a few weeks (yes, I’ll have to use a calculator) and even us guide-types can begin to see a very serious potential problem. A problem, in fact, the likes of which we have not had to face in the modern era.

What’s happening in Italy, a fully modernized Western democracy where hospitals—and morgues—are completely overwhelmed, is a more likely projection of where we’re headed than what happened in China, where the Communist regime clamped down with vice-like restrictions that would stop cold the hearts of every member of the ACLU, but also stopped the virus spread among the populace, at least for the time being.

I was among those who early-on believed “it can’t happen here”, but clearly it can and it is. We can hope that the malaria drug with antibiotic turns out to be a miracle cure or at least a palliative, and that a vaccination arrives super fast—but super-fast in that world is at least 12 months. Until then, the only remedy is for us to pretty much stay away from each other, and to wash hands and/or disinfect pretty much anything that comes to our door.

To be sure, the people that are most hurt by a complete shutdown will be small businesses and single-operators like fishing guides. They aren’t going to get unemployment checks, but their boat payments will continue. So will their rent or mortgage payments, and the cost of groceries and shoes for their kids. While some go to other work when guiding slows, there won’t be as many of those jobs available this year as the economy grinds to a halt. (Amazon and Walmart are hiring fast to handle online ordering, but other jobs are disappearing faster than the last ice in Minnesota.)

One plus out of this, when we come out the other side, is that the fish—which don’t catch COVID-19—are getting a long vacation from fishing pressure. Fishing should be great when we can get back to it. And for the meantime, if you have a secret angling spot you like to sneak off to on your own, there’s very little risk—and the fresh air and the chance to get away from CNN and FOX will probably do you good.

We’ll come through this, and it won’t take long for the American economy to gear up and get back to business as usual. In the meantime, we’re all going to have to hunker down and play with what we’ve been dealt, in the Spring that wasn’t.