After more than 20 years of study, frustration, experimentation and dogged persistence by CPW’s aquatic researchers, the tide has turned in the fight against Whirling-disease. 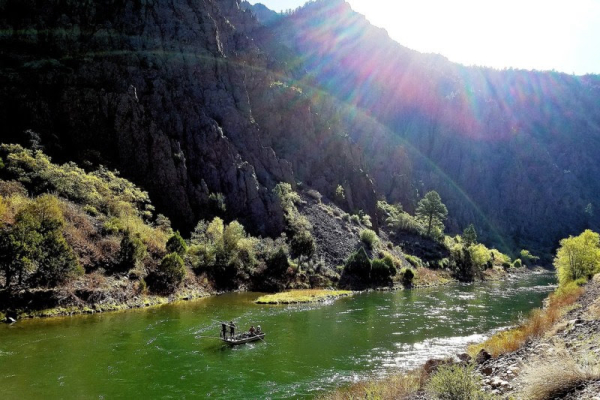 Whirling Disease first impacted Colorado’s rainbow trout in the mid-1990s and eliminated many wild populations of this popular sport fish. The aquatic tragedy sparked a decades-long effort by Colorado Parks and Wildlife research scientists to find a remedy and re-establish populations. 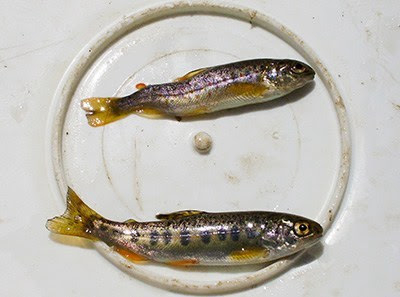 About Whirling Disease
Myxobolus cerebralis, a metazoan parasite, can cause a serious affliction in some species of trout and salmon known as whirling disease. The water-borne parasite may not directly kill trout, but severely infected young trout often develop debilitating deformities of the skull and spinal column or display the erratic tail-chasing behavior from which the disease gets its name. To learn more, please visit the CPW website.

Since 2003, the researchers have been crossing a strain of rainbow trout resistant to the disease with other strains of rainbows in the hope of developing a trout that would fend off whirling disease. Now, after more than 20 years of study, frustration, experimentation and dogged persistence by CPW’s aquatic researchers, the tide has turned in the fight against the dreaded disease. Whirling-disease resistant rainbows are now thriving in the wild and the agency is collecting their spawn, enabling hatcheries to propagate millions of fish that will be distributed to rivers and streams throughout the state. 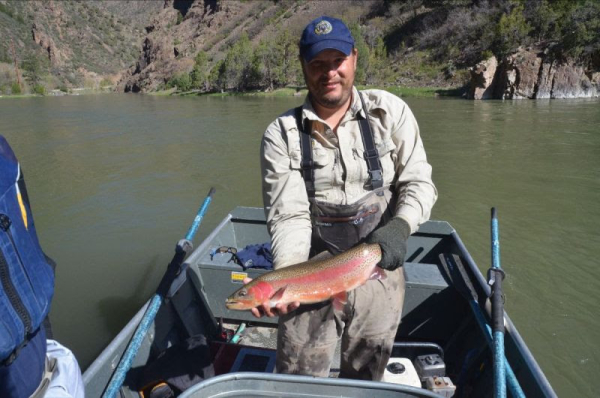 “Thanks to advance genetic testing, we know these fish are maintaining their resistance to whirling disease,” said George Schisler, CPW’s aquatic research chief. “Now they are surviving, reproducing and contributing to future generations of Gunnison River rainbows.”

This long success story started on an August day in 1994 when former CPW researcher Barry Nehring, while walking the riverbank in the Gunnison Gorge, noticed small fish swimming helplessly in circles. He knew immediately that the fish were infected with a microscopic spore that damages the cartilage of young fish and prevents them from swimming and developing normally. Whirling disease had arrived in the wild.

The disease was accidentally introduced to Colorado in the late 1980s when infected fish were imported to state and private hatcheries. After those fish were stocked in 40 locations, the spore spread and within a decade infected many rivers throughout the state. The disease kills young fish, so eventually, natural reproduction by wild rainbows ended across much of Colorado.

In search of a remedy, CPW scientists and biologists from wildlife agencies throughout the West started researching the disease in the late 1990s. At a national conference in Denver in 2002, a researcher from Europe who studied whirling disease gave a presentation about a strain of disease-resistant rainbow trout he’d found at a hatchery in Germany. Schisler, working with the University of California-Davis, imported eggs and then tested the hatched fingerlings, known as Hofers – named after the German hatchery. He found they were 100 times more resistant to the disease than the various CPW rainbow strains.

He also learned that because these fish had been raised in a hatchery for decades, they showed no inkling of the flight response needed to elude predators in the wild. So researchers started crossing them with wild strains, such as the Harrison Lake and Colorado River rainbow to produce fish that exhibit wild behavior and maintain resistance to whirling disease. Those fish were stocked in rivers around the state and some natural reproduction started.

Biologists working in the East Portal Section of the Gunnison River gorge began documenting wild reproduction of rainbow trout in that location in the mid-2000s. These fish demonstrated strong resistance to whirling disease, but also had instincts to survive in the wild. Through advanced genetic analysis, Schisler and his research partner, Eric Fetherman, determined that a DNA marker unique to the stocked Hofer-crosses appeared to have been incorporated into this population, resulting in observed resistance to the disease.

The researchers and agency aquatic biologists determined that developing a brood stock using the Gunnison River trout would be the best way to repopulate Colorado’s rivers with wild rainbows. Since 2014, more than 500,000 eggs have been collected from these fish to stock into whirling disease positive rivers and to create hatchery brood stocks. 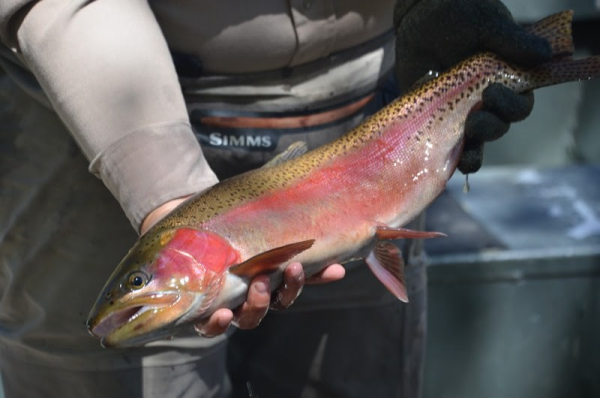 The trout now has its own moniker: The Gunnison River Rainbow. Photo by © Joe Lewandowski/CPW.

The ultimate goal of the stocking effort is to restore natural reproduction in the wild, eliminating the need to stock rainbows in the future.

However, re-establishing the rainbows continues to be a long-term project. After rainbows vanished, brown trout took over Colorado’s big rivers. They prey on the small rainbows that are stocked or hatch and compete for food and habitat with adult rainbows. Biologists say it will take many years for rainbows to become firmly established.

Research scientists don’t declare victory easily, but Fetherman noted that the research project in the East Portal is officially closed. Populations across the state will continue to be monitored because the tiny worms that produce the spores causing whirling disease will likely always exist in Colorado’s rivers.

“I feel like we’ve done some good work and these fish are ready to be stocked statewide,” Fetherman said.

Written by Joe Lewandowski. Lewandowski is a public information officer for the Colorado Parks and Wildlife southwest region.