Specialized 'Yak Gear that Can Improve Your Fishing, from Hobie 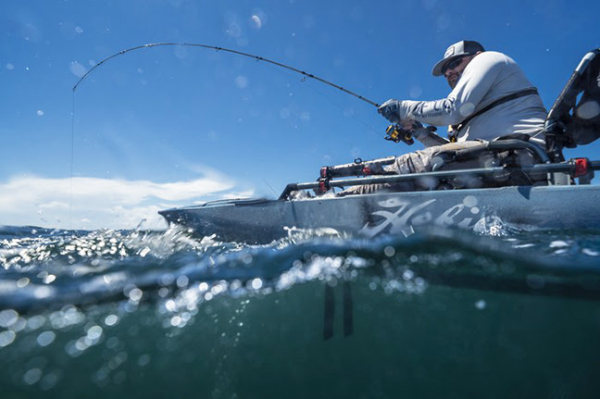 OCEANSIDE, Calif. - Think of it like a downsized bass boat that happens to afford stealth-access to untouched fishing spots. If you’re an angler the likes of Kristine Fischer, it also serves as your mobile fishing office. For Hobie kayak pro Fischer and countless expert ‘yakers, outfitting their fishing rides distills down to space management and accessibility; i.e., How fast can I find and grab that particular hot bait?

Just like the desk in your cubicle (dread the thought), every little gadget, doodad and device—from your computer screen, mouse and iPhone all the way down to your favorite pencil—must lie within arm’s reach at all times. Preferably, you can snatch it without getting up or falling out of your chair.

“That’s one of the first things you notice and appreciate about a boat like my Hobie Pro Angler 14,” notes Fischer. “Every element of its design has been intelligently positioned to maximize space and allow for optimal convenience. But the kayak’s also been engineered to allow for customization, if you want. Hobie understands that every angler wants to trick their ride with different gear—electronics, rod holders, tackle storage and other essentials.”

Hobie Associate Product Manager of Fishing Accessories, Howie Strech is quick to spotlight the kayak company’s H-Rail system, which serves both as a convenient kayak handle and as a robust mounting base for an array of accessories along either side of the boat. “Adjustability is everything in kayak fishing, and the H-Rail lets you quickly attach, remove and adjust all the essential ‘yak accessories,” says Strech.

“The 12-sided H-Rail accepts a 1” or 1-1/2” RAM ball, to which most anglers mount sonar units, a GoPro or an Aqua-Vu underwater camera. You can also attach horizontal rod racks and rod holders, as well as cup holders and tackle bins, and the Universal H-Rail Mounting Plate allows you to adapt nearly any mounting base and accessory on the market.” 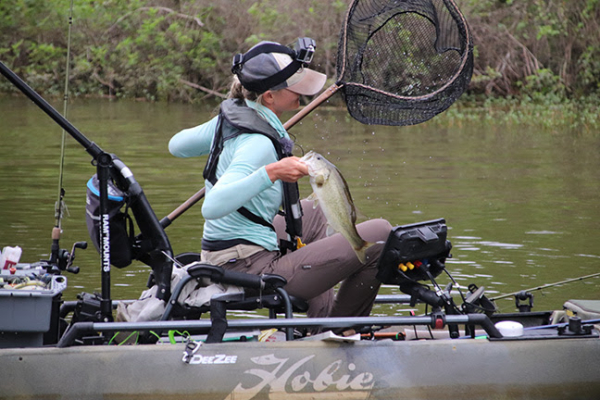 Fischer calls out one particularly valuable accessory adaptation. “I use a paddle holder connected via 1-inch RAM ball to secure my landing net,” explains the Hobie Bass Open champ. “Instead of holding a paddle, I use it to keep my net resting up in the front of my kayak where it’s out of my way but easy to reach.”

Also connected to the H-Rail of Fischer’s Pro Angler is a second RAM mount for her Lowrance HDS 9 sonar. “One kayak-specific tweak is a Point-1 GPS module, which shows me the exact on-screen position of waypoints relative to the nose of my kayak,” says Fischer. “This assures that every cast I make is right on target.”

Another often-overlooked tech-tool that accompanies both Fischer and Strech on every outing is an Aqua-Vu micro underwater camera. “I can mount the Aqua-Vu directly to the H-Rail with a Pro Snake mount or use a RAM Camera Mount designed for a GoPro,” adds Fischer. “The Micro Revolution camera even has a built-in cable reel so I can instantly drop the optics into the fish zone and see what’s happening. When I’m done, I can reel the camera back up as quick and easy as retrieving a lure. The camera is an awesome tool for tournament prefishing, too.”

On the East Coast, pro kayak angler John Hostalka has taken the initiative of DIY-rigging his own GoPro mount. “My Hobie Mirage Outback is so full of extras that I haven’t had to do much accessorizing,” admits Hostalka, who casts for the wide variety of species in Chesapeake Bay.

“But for taking video, I needed a mount that allowed me to easily spin the camera any direction with one hand. Based on something I saw Brandon Barton using, I made a mount modification to my Scotty rod holder base that also let me remove the pole and camera for taking quick underwater release shots. It’s a pretty slick set-up that I can even adjust while fighting a fish.”

Another increasingly important piece of on-board electronics used by anglers is a Power-Pole Micro. The downsized Power-Pole rides astern and pins the kayak in place in up to 8-feet of water, which is especially handy for achieving perfect positioning in windy conditions.

“Everything is powered by a single Dakota Lithium 23-amp battery, which is half the weight of a comparable sealed lead acid battery. Also keeps me juiced up for up to sixteen hours straight—either a really full day on the water or two or three normal days of fishing. The battery can fit into either the front hatch or right under my seat, secured in place with zip ties.”

“The storage space in these boats will blow you away,” adds Fischer, who admits to carrying a load of tackle, and up to 14 rods a day. “I can carry 12 rods—2 per slot, 6 per side—in the built-in rod racks on my Pro Angler. I like that they’re horizontal so I can sneak under bridges and trees without worrying about snapping tips.”

Strech notes Hobie’s ultra-versatile H-Crate, which fits perfectly in the space directly behind the seat. “The H-Crate Storage System is made for personalization,” suggests Strech. “Its integrated rod holders carry four combos, but can accommodate up to 10 or more with additional rod holders installed to the crate’s grid walls. The H-Crate also has four sections of H-Rail that serve as carry handles and accommodate extra accessories such as a tackle bin or Hobie’s new feature-rich Mini Bin. Inside, you’ve easily got enough space to pack around ten standard 3700-size tackle boxes.” 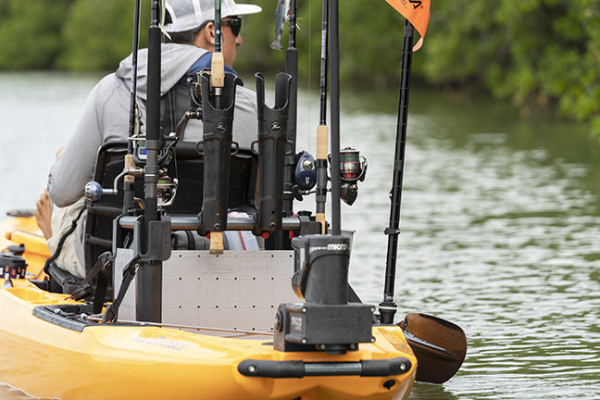 Fischer, of course, loads her H-Crate with tackle and then some. Between her seat and the H-Crate lies a Cal Coast Battle Box, which organizes terminal tackle such as tungsten bullet weights and worm hooks. Under her comfortable, adjustable seat, Fischer stashes two additional totes filled with Ned rig baits and other soft plastics. Attached to the back of the seat is a zippered Vantage Seat Accessory Bag loaded with fluorocarbon leader and other fishing line.

Beneath the hidden hatch at her feet lies a Hobie Rectangular Gear Bucket filled with the most important plastics or lures for the day’s fishing; pliers and other tools fit neatly into a cargo pocket built-into the underside of the hatch lid itself. The kayak is also armed with extra rubber mesh pockets alongside the seat, which Fischer uses for more tools and a Cal Coast Donkey Leash lanyard equipped with a multitool. Up front, the spacious bow hatch is equipped with a liner that contains more lure totes, camera monopods, safety flags, a hand paddle and an extra life-vest.

Providing extra traction, comfort and sound-dampening advantages, Fischer finishes her ‘yak with Hobie EVA Deck Pads, giving it a cool, customized look. “People tell me I have the most organized kayak they’ve ever seen,” she laughs. “I’m not so sure about that. But it does always amaze me how much tackle, accessories and electronics I’m able to fit on this rig. When the bite is on and time is short, sure is nice to having everything I need right at arm’s reach.”

Since 1950, Hobie has been in the business of shaping a unique lifestyle based around fun, water and quality products. From their headquarters in Oceanside, California, Hobie Cat Company manufactures, distributes and markets an impressive collection of watercraft worldwide. These include an ever-expanding line of recreation and racing sailboats, pedal-driven and paddle sit-on-top recreation and fishing kayaks, inflatable kayaks and fishing boats, plus a complementary array of parts and accessories.