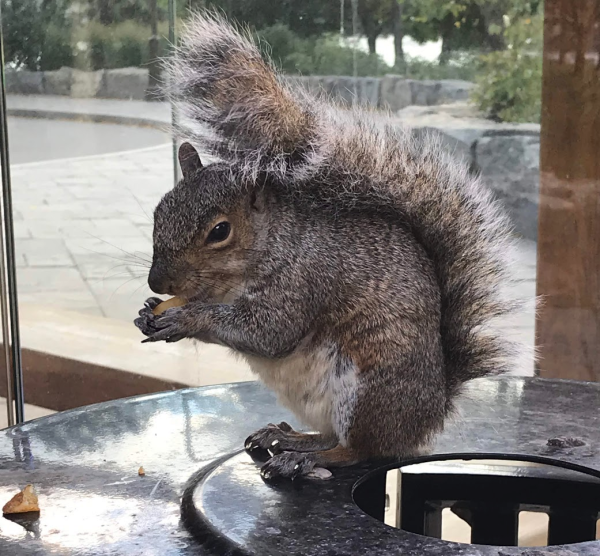 This is the time of year when, for an abrupt change of pace, some anglers might choose to go squirrel fishing.

At least, that’s what some neighbors have accused me of recently as I baited up with acorns to fool the resident grass carp in our North Alabama neighborhood lake. (I would never actually fish for squirrels, of course, though in my youth I did briefly try to fool robins into pecking at plastic worms crawled slowly across the lawn—until Mom caught me.)

Every year in October the giant carp, which are put in the lake to keep down aquatic weeds, turn from eating vegetation to gulping down acorns that fall into the water from overhanging oaks. The specialized feeding lasts for about a month, until the acorns stop falling, but while it’s on, the carp present a very interesting an unusual target for freshwater anglers not used to catching fish that frequently weigh 15 to 20 pounds. There’s probably a lake near you where the same species is doing the same thing—grass carp are now found in at least 45 states.

And while common carp have a generally poor reputation among anglers in the U.S. (they’re venerated in Europe) grass carp are a whole other critter. Bringing one in is very similar to battling a redfish of similar size—they’re strong and have far more endurance than most freshwater fish, and they occasional boil on top or even jump partway out of the water. Caught on anything short of 15-pound-test gear, they’re a real handful.

They’re also a whole lot more wary than common carp. They have very good vision, and are quick to spook if a boat or a bank-walking angler approaches too close. Getting a successful cast to them requires a slow and stealthy approach, and the bait has to come down just right, not close enough to scare them but close enough that they can hear it “plop” into the water.

It’s the sort of angling challenge that can add a bit of interest to anglers burned out on the slow action for late summer and early fall largemouths.  And for the charge that carp are inedible—more or less true—very few anglers kill and eat bass these days, either.

Handling these bruisers is not a light tackle game—I gear up with a spinning rod suitable for bull reds or king mackerel, a 4000-sized spinning reel and 20-pound-test braided line, which actually probably tests closer to 30. A couple feet of 25-pound-test monofilament acts as a leader, running to a size 1/0 octopus type hook in short shank. The hook has to be fairly heavy wire—the fish quickly straighten crappie-weight hooks.

The bait is a green acorn, without the cap. They like most types, but an acorn from a red oak is hard to beat. White oak acorns are often too large for them to eat, and they don’t like overcup oak acorns either. 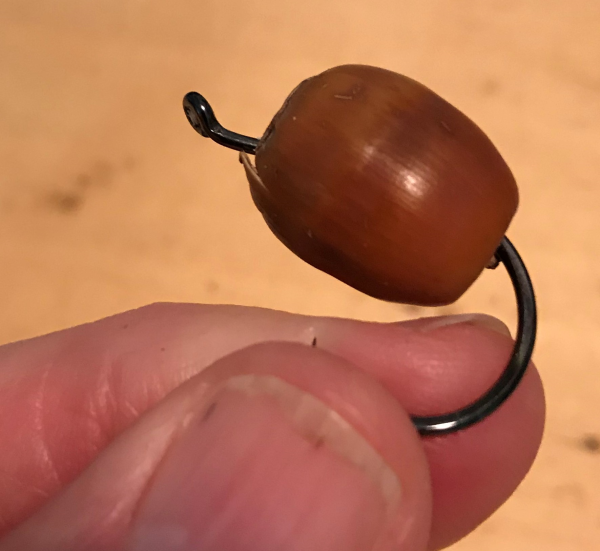 Getting the hook through an acorn can take some doing—if you get into “squirrel fishing”, as I admit that I have, you’ll probably want to gather several acorns in advance, drill a tiny hole through the center and then push the hook eye through so that it’s just exposed—the thing looks like a fat bass bug without hackles. Otherwise, you have to force the hook point through the acorn, not an easy matter, though do-able. Use no weight—the acorn will sink slowly on its own.

Find an overhanging tree where the carp are feeding, slip up silently and make a cast. Free-line the bait all the way to bottom. Many times, the carp grab it on the way down. If not, let it sit on bottom for a few minutes.

When a fish takes, there’s no doubt about it—they gulp it down and take off like a shot. Set the hook and you’re in for maybe the most impressive battle you’ll run into in southern freshwater, with the possible exception of a monster blue or flathead catfish.

This is a pump-and-reel fight—you can’t just reel them in like you can most bass. It’s more akin to fighting a saltwater fish or a big landlocked striper. They also act a bit like cobia when you bring them to shore or into the boat, going bonkers for a time—best to stand back and let them run out of energy before removing the hook. 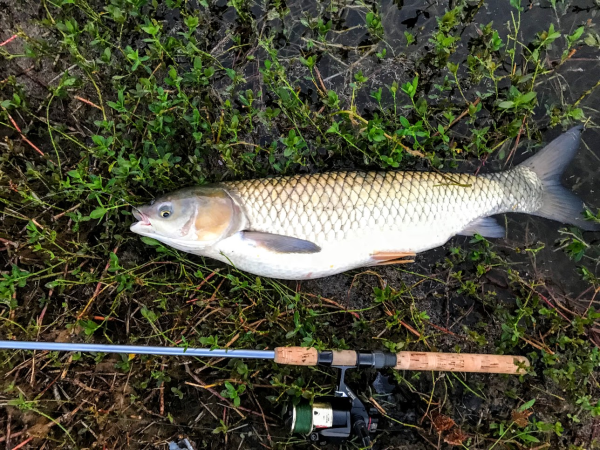 When the battle is over, grab a few quick photos and let the fish go back to doing what it was put into the lake to do, patrolling for excess weed growth. The stocked fish are sterilized and not capable of reproducing, a measure to make sure they don’t become invasive problems as their cousin silver carp have in many waterways.

Catching fall grass carp is an interesting diversion and a new challenge for many anglers. It’s assuredly unlikely ever to replace chasing largemouths, and I don’t see a million-dollar payout U.S. Carpmasters Classic on the horizon any time soon, (though there actually is a carp classic in France) but it’s a lot of fun while it lasts.