A Primer on Hooks, from the Florida Fish & Wildlife Commission

Knowing the right kind of hook to use, selecting the correct size and keeping it sharp will help every angler land more fish.

No matter how good a rod you’re using, no matter what brand of line is on the reel, no matter what you paid for that lure, it all meets the fish at only one point—the hook. Knowing the right kind of hook to use, selecting the correct size, and keeping it sharp will . . . put more fish on the hook!

The parts of a hook (left) are relatively simple, and will apply to nearly all kinds. There are many different kinds of hooks available, but don’t let yourself be overwhelmed—a few basic hooks will meet most of your needs. When choosing hook size, go smaller rather than larger when in doubt . . . many large fish have been caught on small hooks! Note that the numbering of hook sizes increases as the hook gets smaller (the bigger the number, the smaller the hook!). The exception is when the numbering gets down to 1 for larger hook sizes (1/0 or greater), in which case the hook size increases as the number does (1/0, 2/0, 3/0, etc.).

The Aberdeen is an excellent all-around choice for light freshwater bait fishing. The fine wire minimizes damage to the bait, and reduces interference with its natural movement. The long shank also makes hook removal easier even if the fish has partially swallowed the bait. This hook is designed to bend and pull loose under heavy pressure if it becomes caught on a solid object such as submerged brush. For this reason, don’t use too heavy a line with an Aberdeen—if there’s a big fish on the other end instead of a stump, you want the drag to slip before the hook straightens! Good sizes include 8-10 for bream, 4-6 for crappie, and 2-6 for light-line bass or catfish angling. 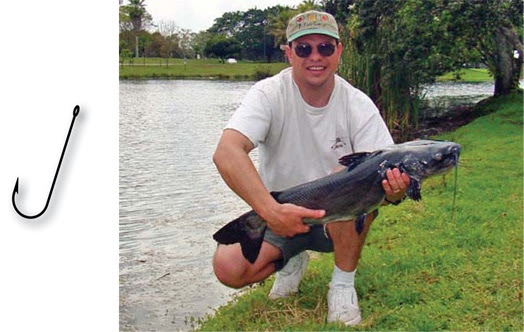 A small #6 Aberdeen hook was used to land the 12-pound catfish that surprised the angler above. The fish was originally stocked by FWC.

For heavier bait fishing, many savvy anglers have turned to the popular circle hook. Although not a new design (it’s been in use by commercial anglers for years), the circle hook has more recently been popularized as a valuable tool for recreational fishermen too. This unusual-looking hook is designed to minimize gut-hooking, instead catching the fish near the corner of the mouth almost every time. Not only that, but anglers experience a significantly higher percentage of successful hookups too—circle hooks reduce the number of missed strikes. Instead of setting the hook when you get a strike as you do with conventional hooks, you should simply apply increasing pressure and the fish will basically hook itself. Circle hooks are especially helpful for unusually difficult hooking situations, such as bait fishing for tough-mouthed larger bass or tarpon.

Worm hooks for weedless rigging of plastic baits come in a variety of styles. These hooks usually have a distinct elbow bend in the shank near the eye, where the following part of the hook will emerge from the plastic bait. These are available in straight or offset shank styles. In order to rig a “straight” worm that will not twist unnaturally when retrieved, lay the hook on top of the worm and note where it should emerge from and re-enter the body. By rigging the worm this way, you should be able to avoid making the worm kink. Sizes used generally range from 1 to 5/0, depending on the size of the plastic bait. Wide gap versions have become increasingly popular for plastic baits.

Getting to the point: Modern hooks come out of the package much sharper than their ancestors did! If you are using a name brand hook, you may not need to sharpen it at all, or only touch up the point if it gets dulled. For freshwater hooks, a small whetstone works better than a metal file, which tends to remove too much metal too quickly. Sharpen the hook on each side first, and then finish up by sharpening the point opposite the barb. If the hook hone has a “point groove,” then the final step is that much easier. The traditional test of hook sharpness, seeing if it “sticks” when you touch the point to your thumbnail, still works.

To barb or not to barb: Although more and more hook styles are becoming available barbless, most of the time it’s still up to the angler to provide this option for himself if he wants it. Barbless hooks have the advantages of penetrating a fish’s mouth more readily and being easier to remove (from fish, shirt, or fishin’ buddy!), in addition to reducing the level of hooking injury likely to occur to the fish itself. Especially for beginning anglers, quick hook removal from fish or self is a major convenience. De-barbing is probably most important for bait fishing, where the chances of a fish swallowing the hook are higher. However, many anglers de-barb all their lure hooks, too. Regardless of whether you fish simply for the sport, or strictly for the frying pan, the FWC encourages anglers to use barbless hooks so that those fish that are released have a better chance of survival.

So remember . . . a good rod-and-reel combo and decent line can help you catch fish, but you’ll want to have a good hook too!