Whatever you call the lowest lake in the Savannah chain along South Carolina’s “West Coast” the fishing there is red hot, even when the weather turns cold.

Ask an old-time Sandlapper (that’s a South Carolinian for you folks “from off”) what the big lake bordering the Sumter National Forest North of Augusta is called, and like as not, they’ll tell you it’s Clarks Hill.

That was true for a long time, but both the dam and the lake impounded by it were renamed after South Carolina’s longest-serving U.S. Senator in 1987 as the “J. Strom Thurmond Lake and Dam.”  Before that, the lake was known on both sides of the border as “Clarks Hill,” though it’s official name when opened in 1954 was “Clark Hill” (a clerical error later corrected at the insistence of Senator Thurmond.) Anyway, that’s history (and politics) for you — one lake, three names.

Today, with nearly 71,100 acres of water and 1,200 miles of shoreline at full pool, Lake Thurmond is a haven for outdoor recreation such as fishing, boating and paddling, as well as a major attraction for anglers, tourists and people looking for a nice place to retire.

Though the lake was built with the primary purposes of flood control and power generation in mind, recreation was part of the plan from the beginning. Constructed between 1944 and 1954 by the U.S. Army Corps of Engineers, the project plan included numerous shoreline recreation spots for camping, picnicking and bank fishing built at the same time that have remained popular throughout the years. Numerous private camps and marinas also sprung up around the lake in the years after it opened, and the South Carolina Department of Parks, Recreation and Tourism maintains three beautiful state parks that all offer lakeside camping and water access via boat ramps — Hickory Knob, Baker Creek and Hamilton Branch.

Lake Thurmond is sometimes referred to as an “angler’s paradise,” and it’s easy to see why; there’s a reason Bassmasters magazine and Bassmasers.com recently included it on their list of the Best Bass Fishing Lakes of the Decade in the Southeast. The lake’s abundant underwater timber and large forage base of blueback herring, gizzard and threadfin shad provide the essentials for great fishing — food and cover. Anglers at Lake Thurmond can successfully target largemouth bass, and a large population of stocked striped and hybrid bass. Flathead and blue catfish, crappie and bream are also plentiful.

With the area’s mild weather, late fall and even into winter is a great time to get out on the lake and chase schools of stripers and hybrids. The fish are in winter prep mode and can be found loading up on schools of shad or herring. Landing a forty-plus pound fish isn’t unusual. Experienced guides on the lake will advise you that the way to find winter stripers and hybrids is to find the baitfish, and one way to do that (other than using sonar equipment) is by looking for flocking gulls feeding on the surface. The birds also show up in big numbers beginning in fall, which just goes to show you – the Palmetto State’s “West Coast” is a popular stop for winter migrants of all kinds (even the two-legged type). 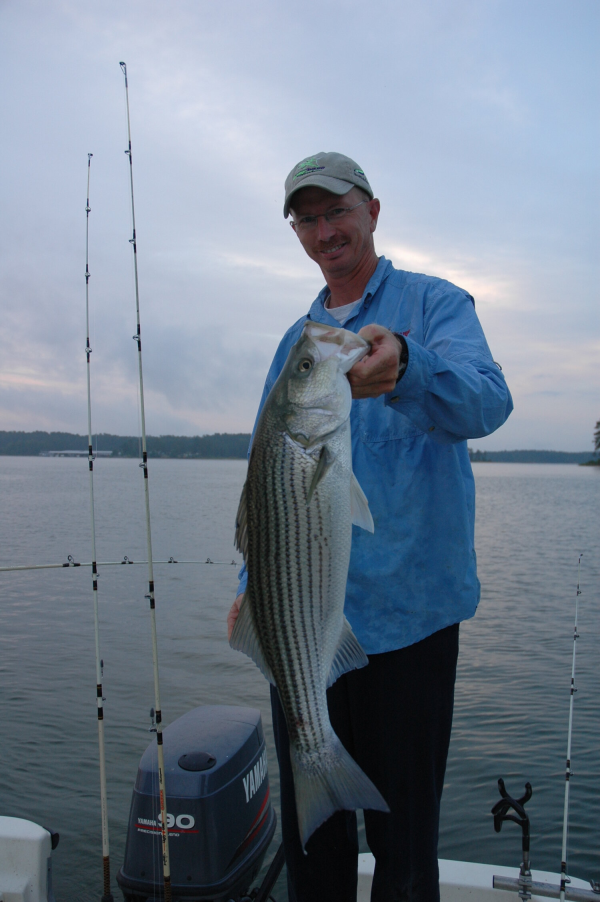 In the spring, crappie on the lake begin moving into shallower water to spawn, and that’s when knowing where the lake’s well-maintained fish attractor site can work to your benefit, especially if fishing from the bank is your thing. Visit the USACE’s Lake Thurmond Recreation pages to find maps, or the SCDNR lakes pages.

The largemouth bass bite also turns on in the spring, when water temperatures begin to rise and the fish seek coves and shallow water to spawn.  But bass can be caught on Thurmond even throughout the dog days of summer if you know where to look, and just like with the wintertime striper/hybrid bite, the key will be locating the baitfish – blueback herring in particular. When the spawn is finished and hot weather takes over, the bluebacks head for deeper, cooler water and the bass will follow.  Points and deepwater brushpiles are key spots, and topwater lures can be deadly effective in that scenario, according to a pro angler who should know – local bass fishing hero Casey Ashley. 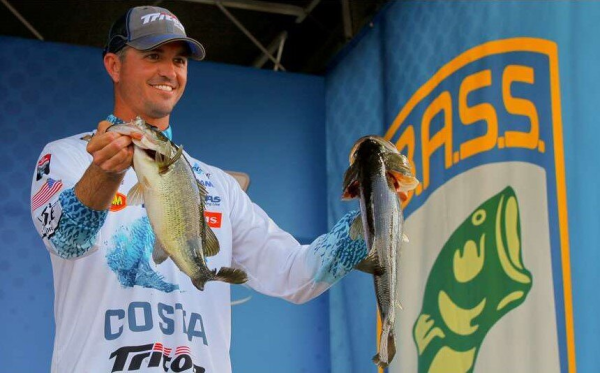 But don’t forget about catfish during the summer months. From June, all the way into early fall, catfish in the 1-10 pound range are pulled out of the lake in large numbers. Fish fry anyone? Anchoring or drifting off of points or humps while fishing cut bait or stinkbaits close to the bottom are the tried-and-true tactics. Night fishing is also popular, and some say that’s when the bigger cats are more likely to be landed.

Whatever time of year you choose to visit, it won’t take long for you to discover why Bassmaster magazine recently included Lake Thurmond/Clarks Hill as one of the top bass lakes of the decade in the Southeast.

For a broader look at the area’s other attractions – scenic drives, historic sites, hiking trails and local hotspots for BBQ or country cooking, try the website for the “Old 96” tourism region for help with itineraries, accommodations and travel plans.